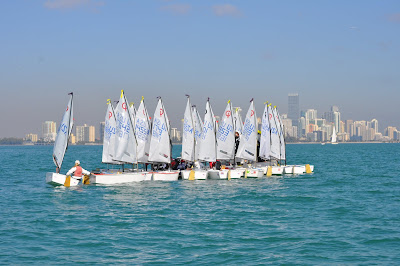 Sailors and parents attending the 2010 annual Orange Bowl, hosted by Coral Reef Yacht Club, were geared more for the NE winter then the typical warm Southern Florida climate. OB 2010 started off cold – (record low of 39 degrees!) and windy. As the cold front that dumped snow from NE down to Nashville, TN, conditions on the Biscayne Bay turned warm and light with postponements that allowed kids to provide caroling entertainment for the spectators!. We heard reports from Miami from sightseers that there was breeze on South Beach but locals we spoke with are convinced that Biscayne Bay can have its’ own micro climate. 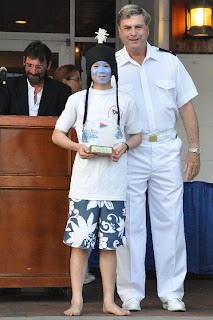 
Congratulations to this year’s winner Sean Brennan who sailed a very consistent series with no finish out of the top 10. LISOT had a very strong showing with 3 in the top 10 and 11 in the top 25 finishers.

Conditions on the first day of the regatta were more like Long Island Sound in October with overnight temperatures in the low 40’s and gusty winds 15-20 knots.
Dry suits were in strong demand and several of our team dug them out of their bags, others layered up and donned their new LISOT wool ear flap caps {thank you Tory Cane – more about this in another e mail}. Temperatures made it up into the mid 50’s but close to 40 sailors retired due to the cold and windy conditions.
As the cold front went through the temperatures warmed and the wind died. The first 2 days saw 3 races a day, the 3rd with 1 race and racing was cancelled with no wind on the last day. Overall 7 races were sailed over 2 divisions resulting in 1 drop.
Almost 100 people including sailors, parents and siblings attended out team dinner, a testament that Orange Bowl has become a family affair with LISOT. Several families had children in 2-3 different fleets and boats participating.