Congratulations to LISOT, representing Team USA, who was the first non-European team to win the prestigious BMW Opti Team Cup in Berlin Germany. 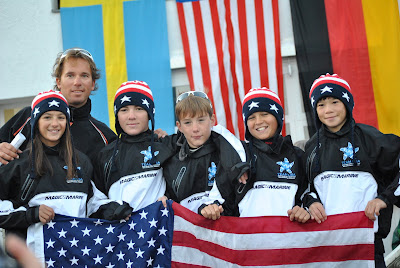 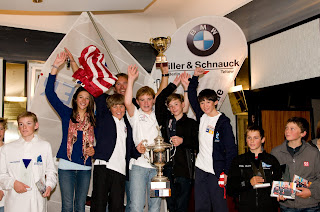 Yesterday we finished the day winning all 12 races! Today we started already in the finals because we were the leaders of the 3 stage round robin!

Conditions were very light, 2-4 knots for the first race. And we won!
Conditions for the 2nd race against one of the 4 GER teams worsened down to 1-2 knots. For the majority of the race USA held their positions. At the last upwind GER was able to get better speed and we lost!
The last race of the 3rd stage was against ITL, also in 1-2 knot conditions and USA won!

The thought of sailing the finals in these conditions was not ideal for any team. And the race committee decided to postpone for a while until the wind picked up to 5 knots.
The final final was on! USA vs NOR!

In the first race USA was the winning combination 90% of the race and the race became very difficult in the last upwind, but we held on and won!

The second race USA was looking for the title, and we went out for that! Just one more win and we will be the Champions!

We started again in a great position! But the wind got lighter on the reach until all the boats were grouped together again. One more time after a great last upwind and a nice leward mark rounding with a NOR sailor doing a penalty, we fought like champs during all the upwind against a great team and we got the 1,2,6 & 7!

The lake went wild. Spectator boats were screaming and honking their horns! Two little kids came with US flags!
I can't explain in words the faces of the team, hugs, hands up and celebrating!!

There were 4 world teams racing and the level of the Europeans in Team racing is really good!

At the awards we all went to the podium! We received 2 awards: one for being the team traveling the furthest to compete, and a Challenge Trophy with all the champions names on it...no non Europeans have won it before! We are the first USA Team to win the BMW Team Racing Regatta!!!!

As you can imagine we are all really happy and looking forward to flying home celebrate!