This years' Team Trials has gotten off to a bang. 7 of the 18 sailors on Team LISOT are in the top 25 after 8 races during the first 2 days of the regatta. Harry Koeppel is in 2nd.
The conditions and the RC at Texas Corinthian YC in Kemah, TX have been superb.
Day 1 saw strong SSE winds in the 15-20 knot range with 25 knot gusts in the afternoon and a short and steep chop on shallow Galveston Bay (depth is only 10 feet). Day 2 had slightly lighter air, mainly 10-15 with overcast skies. Temps both days have been around 80.
Harry had a fantastic Day 2 with finishes of 1, 1, 3, 5 and moved from 20th after Day 1 up to 2nd overall after Day 2 with 32 points. Malcolm Lamphere is right behind in 9th with 1, 5, 13 (27) today and 45 points.
LISOT finishes (full results at www.usoda.org/prelim):
2nd - Harry (32 points)
9th - Malcolm (45 points)
10th - Ty Ingram (46 points)
11th - Megan Grapengeter-Rudnick (top girl) (49 points)
16th - Jack Parkin (64 points)
19 - Reinier EVD
22 - Drew Gallagher
40 - Will Logue
49 - Augie Dale
59 - Liza O'Connor
70 - Matt Kaplan
71 - Forian EVD
73 - Alex DelBello
79 - Sean Walsh
90 - Jared Gaynes
96 - Kate van Loveren
104- Will Curtiss
148 - Clay Johnson
PRO Ron Hopkins is leading a strong RC team and doing a great job. Races yesterday averaged 50-55 minutes, and today just a tad quicker around 45-50 minutes. Our "own" Peter Wilson (Noroton YC) is here judging, Chief Measurer Janet Grapengeter (Noroton YC) is on the measurement boat and Jill DelBello (American YC) is on the finish boat.
Coaches Pepe, Panic and Fernando have the team focused and very well prepared. The team spent 5 days prior to the regatta training out of TCYC.
Posted by Michael Rudnick at Friday, April 30, 2010 No comments:

Arriving into Milan on Saturday morning was a sight to be seen! Snow capped mountains surrounded the city, with a bright sun and perfect blue skies. Unfortunately, this tease of perfect weather was short lived, and the usual windy conditions had the locals scratching their heads. Light to no wind for Riva? Unheard of…but true this year. 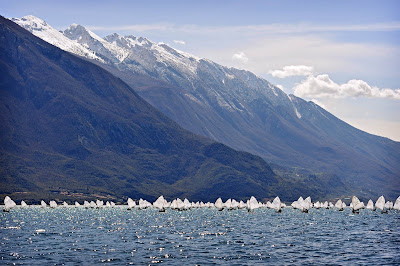 Sunday morning had the kids out and about on bikes and on foot. Weather was warm in the 70’s and the sun was shining. Great exercise climbing up the steep mountain terrain gave the chance for some great photo opportunities! 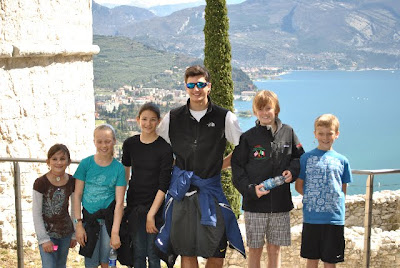 Monday and Tuesday practice saw overcast skies and light to no wind. The Wednesday lay day became optional, as the sun was shining and the wind was guaranteed to arrive around 11 am. More than half of the team participated, while others took their one opportunity to see some sights outside of Lake Garda. 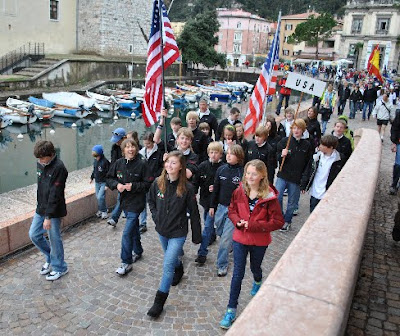 At 4:30 that afternoon the rain and cold damp weather arrived almost putting a damper on the parade. 900+ sailors from over 30 countries participated. Team USA was in true form singing the National Anthem and other patriotic songs as the marched carrying the US flag thru the town of Riva.

The first day of the regatta was a bust, pouring heavy rain all day. The kids were soaked to the bone, and cold! It was tough to travel so far, to have the first day canceled. Day two brought relatively light wind from the north in the morning. Then in the afternoon the thermal southerly arrived allowing for a total of three races to be completed. The kids did not arrive to the dock until 6:30 pm. LISOT kids had a decent day and some good finishes despite the light wind, tough competitors, and skewed start lines.

Day three saw overcast skies with some sun occasionally poking out. We prayed for some thermal warming of the mountains above, and at 1:30 the wind kicked in along with a cold front and 13 – 15 knots. In the end 4 races counted and one drop. Out of 741 boats, Team USA's Roger Dorr, Reinier, Maeve White, & Alexandra made it to the Gold Fleet. KB Knapp, Maddie Widmeier & Audrey were in the Silver fleet, and Emma White was in the Bronze.

The last day was Easter Sunday and the kids found Easter eggs filled with chocolate in their boats. Not sure if the coaches approved but they did not argue as they received bigger Easter Bunnies to munch on. An early 8:30 am launch from the dock brought in two light air races and the conclusion of yet another successful optimist regatta for Fraglia Vela Riva.

Posted by Michael Rudnick at Monday, April 12, 2010 No comments:

LISOT Gives & Gets at the Opti South Americans

The trio "gave" by donating sails to Paraguay and El Salvador, and "got" by bringing home Gold and Silver (full results).

The US won the Gold Medal at the Nations Cup Team Race. Harry Koeppel (below, 2nd from left) and Malcolm Lamphere (2nd from right) were members of the winning USA Team 1. They beat USA Team 3 in the finals. 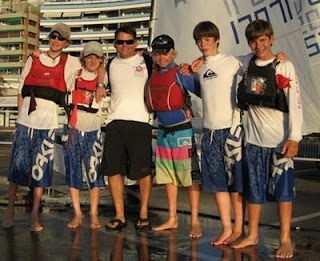 Megan Grapengeter-Rudnick (below, 2nd from left) was awarded the Womans Vice Champion award for finishing 2nd girl overall. Megan was also the #2 US sailor. 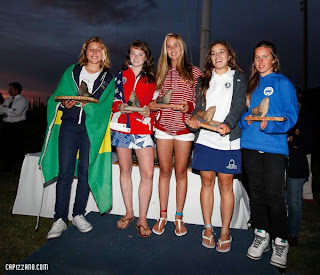 And Team USA donated sails to Paraguay and El Salvador to help support new Opti programs in those two countries. Team USA was recognized for this by IODA. 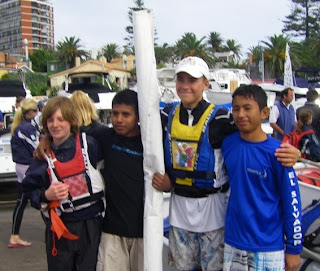 Posted by Michael Rudnick at Wednesday, April 07, 2010 No comments: