Perfect Weather to Kick Off Opti Practice on LI Sound

The weather couldn't have been better this weekend to kick off practice on LI Sound for the 2010 season. 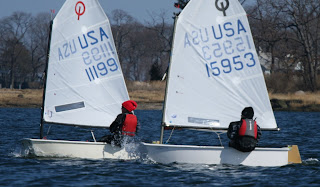 Amanda Clark, fresh off being named to the 2010 USSTAG Olympic Team, put the team thru drills, fleet racing and team racing under beautiful sunny skies and air temps in the 40s. With the water temps barely above freezing, sailing was still darn chilly, even in drysuits.
Conditions were near perfect, with a very shifty NW wind 10-12 and fairly flat water. On Saturday the team headed far out in the Sound, easily crossing 2/3 of the way to Long Island. 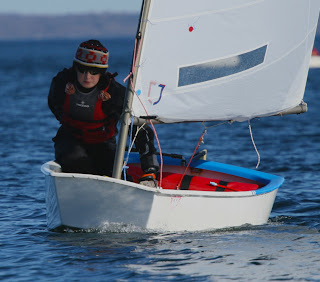 On Sunday they stayed just outside Mamaroneck harbor where they ran tight drills, short style fleet racing and an afternoon of team racing. The breeze was very shifty, making for good tacking and tactical training.
Sailing out of Beach Point YC, the team took is a bit easy this first weekend, leaving the dock around 10:30 both days. Amanda kept them out thru lunch and they were back around 4. It was nice to see the kids head out before the frostbiters, and arrive back afterwards.
A big surprise for the weekend was a baby seal that spent the afternoon sunbathing on the dock. Nobody could remember the last time a seal was spotted on the Sound.
Click picture to see all the photos.
Amanda will be coaching next weekend before she and Sarah Chin head off to Spain for an Olympic-class regatta, and head coach Pepe arrives from Argentina.
Posted by Michael Rudnick at Sunday, March 07, 2010