The 2009 running of the annual Orange Bowl regatta at Coral Reef Yacht Club was one of the best for wind, competition and fun. 222 Opti's sailed in the highly competitive championship fleet, and 84 in green fleet. 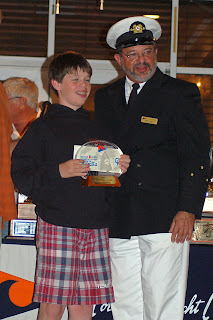 This years' Orange Bowl, won by reining Opti North American Champion Christopher Williford (Lauderdale YC), had stronger competition than any other US Optimist regatta in 2009. Sailors from 28 countries and almost as many States raced in 4 color divisions over 4 days and 12 races.

Malcolm Lamphere (photo right) sailed a very strong regatta and was the top LISOT boat, finishing 6th overall and 3rd US sailor (with 1 bullet). Ty Ingram (photo below) was in the zone for his first Orange Bowl, with two bullets (one was a 40 second horizon job), finishing in 11th overall, 9th in Red Fleet and 5th US sailor. 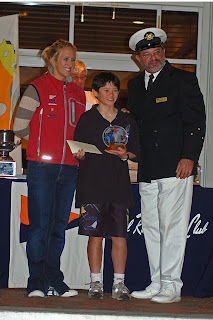 Will Logue, also sailing in his first Orange Bowl, went to the podium for 10th in Blue Fleet. And Megan Grapengeter-Rudnick was 3rd girl overall.

In the Green Fleet Sloane Kratzman was the top LISOTer in 39 overall (and 8th girl).

All the awards were presented by Olympic medalists (yes, that's Anna Tunnicliffe standing with Ty and Regatta Chair Mark Kamilar).
Conditions varied from 4-6 knots and shifty, to 15-20+ and gusty - all with significant current caused by the Dec 31st Blue Moon. Daytime temps were mainly in the 70s, but a few mornings saw very cold 50 degree readings. There were even a few drysuits spotted on the race couse, although none were used by LISOT sailors. 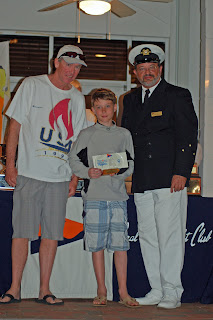 The fleet included some of the worlds top Opti sailors including many who went to Worlds. In addition to Chris Williford, who with his brother Duncan trained earlier in the week with LISOT, Sinclair Jones of Peru, the reining World Champion, finished 4th. He was beaten by his team-mate Javier Arribas and Chris' twin brother Duncan, who finished 2nd and 3rd respectively.
Last years Orange Bowl winner, Carlos Robles from Spain, who earlier in the month had finished 2nd at the IODA Asian Championship, was 5th.

Congratulations to all the 23 LISOT Opti sailors who spent a warmer holiday on Biscayne Bay than skiing in Vermont! And to Teddy Stubbs who reminds us all, on SailGroove, what Orange Bowl is all about.