All LISOT Sailors Bring Home Silver from the Opti Mid-winters 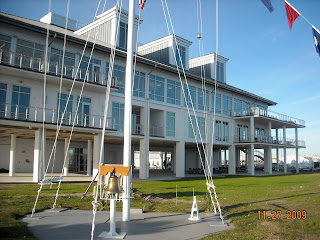 The USODA Mid-minters, which have been held at Southern Yacht Club in New Orleans for as long as anyone can remember, was hosted this year in their beautiful new 3 story clubhouse – completely rebuilt, literally from the ground up, after Katrina devastated the club.

Four LISOT sailors - Will and Matt Logue, Kate van Loveren and Jack Parkin – all paid their first of what will be many away game visits to SYC – this year seeking to qualify for US Team Trails after being denied that chance when the ACCs ended with no racing earlier this fall on our home court of LI Sound. 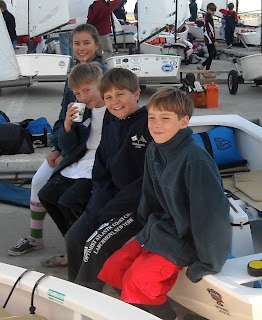 LISOT teamed up with GSOT (Garden State Opti Team) for this regatta as each team had a handful of sailors making the Southern trek. The joint team was coached by a familiar LISOT face, Danielle Soriano, who is now head coach of GSOT.

Surviving what turned out to be reasonable holiday travel, everyone arrived with all gear intact and the kids got in two good days of practice before the regatta. Wednesday the four LISOT sailors got in some training with the team from Southern YC, whose head coach, Peter Strong, also coaches the USNDT and TeamUSA at international regattas. The LISOT/GSOT team also joined with sailors from the McLaughlin team for a couple of hours of good breeze and the famous Lake Pontchartrain chop.

After practice on Thursday everyone had a quick shower and put on their yacht club best for the great Thanksgiving dinner with all the trimmings. After getting back to the hotel, the kids went right to bed, and the parents convened the all important LISOT “coaches meeting” in the Bistro38 bar to plot the days ahead!

Friday the team rose early to chilly light air weather. And in classic SYC tradition, Café duMonde was on station at the club handing out their famous Beignets (and sugaring up the competition)! And the parents who shouldn’t! (Guilty).

The RC completed five races on Day 1 of this 2 day regatta – all in a light to medium northerly. The racing was tight at the top with less than 12 pts separating the top 5 boats. With the top 15 sailors qualifying for Team Trials, Team LISOT was very pleased with their standings after 5 races: Will ( 5th), Jack (9th), Kate (11th), and Matt (40th).

Friday evening SYC hosted a wonderful potluck dinner for the kids and parents, along with a nice raffle. It was then off to bed for the sailors, and for parents, well, you know the rest.

Day two was predicted to be lighter, but a bit warmer. A brave Race Committee got the first race off, but the wind started dying and shifted almost immediately. Wisely, the RC abandoned the race before the first boats got to the top Mark. The wind soon picked up again and racing got off. While the breeze didn’t die, it shifted so much that most of the top boats needed only one tack to reach the top.

After a long windless lunch break, the breeze filled back in and racing started again for the afternoon. Race 8, which would turn out to be the last, was by far the most challenging for the sailors (and gut wrenching for those watching from sidelines). The RC had their hands full as a total of three coarse changes were needed. At one point sailors were heading towards each other with wind in both directions - and those in the middle going in circles. In this last race Matt was in the 8th place for a while, leading Will, Jack and Kate by a mile in the beginning of the Race!

In the end, all four LISOT brought home silver and Will, Jack and Kate achieved their goal of qualifying for Team Trials:

After racing the team was in heaven, and shared their excitement with coach Pepe, who had been watching the scoreboard and called from Buenos Aires to congratulate everyone!

Thanks to coach Danielle and the GSOT team for welcoming LISOT for this event. And many thanks to our fantastic hosts Duff Friend and vice commodore Dwight LeBlanc, and SYC for their Southern hospitality.

Next years’ Mid-Winters, over Thanksgiving at SYC, with be the USODA qualifier for spring international teams. And the Pool will be ready!