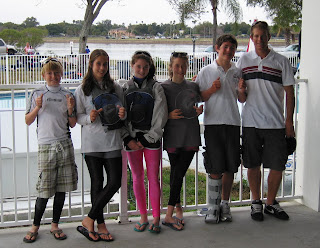 at the USODA midwinter team race championship.
They will be representing the US along with the team from Lauderdale YC (also 12-2) at the 23rd Trofeo "Marco Rizzotti" Europe Cup Team Race Championship in Venice Italy on May 14-17, 2009.
This will be LISOT's 5th year in a row sending a team to Venice. LISOT won the event in 2007 - the first year a US team has ever won.
LISOT fielded 3 teams - the most from any club or Opti team at the regatta, which was wonderfully hosted by Davis Island YC in sunny and warm Tampa, FL.
"TAWP" (Roger Dorr, Drew Gallagher, Casey Klingler, Harry Koeppel and Adele Whitmyer) sailed a strong event and successfully placed a second LISOT team in the final round of four, and finished 4th overall. As the team was approaching the finish line with a winning combo in a race on Day 2 - and the time had come to turn on the boatspeed and solidify the win, Harry offered his team one of the best pieces of advice of the weekend, "Drive it like you stole it!"
LISOT's "GNU" team of Ian Crane, Ty Ingram, Chrissie Klingler, Hannah Morrill and Kendall Swenson (from Annapolis YC) qualified for the gold fleet with a 6th place finish, just behind St. Pete YC Team A.
Trevor Moore and Marek Valasek coached our 3 teams, which sailed well in a wide range of wind and sea conditions from 18 knots and gusty, to near drifting whispers.
Thanks to event Chairman Martin Zonnenberg, PRO Eric Robbins and Chief Judge Peter Van Dyke and their teams of umpires, race committee and event volunteers for a terrific regatta.
Congrats to all our LISOT team racers.
Posted by Michael Rudnick at Sunday, January 04, 2009