Continuing a tradition spanning more than 50 years, the annual Orange Bowl Regatta was held at Coral Reef YC in Coconut Grove, Florida from December 27th through December 30th. This year's event was th 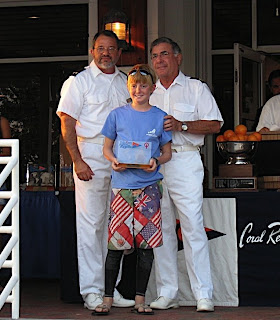 e largest on record with over 700 sailors in the Opti, 420 and Laser classes.

Most LISOT sailors arrived on Christmas Day and were greeted with 80+ degree temperatures, sunny skies and a 10-15 knot sea breeze.

The first day of the regatta again saw temps near 80 and a solid 12-15 knot breeze with moderate chop. The race committee ran three races by 4pm, as the regatta was scheduled for four days.

With a 219 boat fleet representing 23 countries, racing was very competitive. Sailors were very aggressive on the starting line necessitating the RC to make liberal use of the black flag in most races. LISOT sailors had a mixed day - some had good races and some earned one or more black flags - making overall scores quite diverse after Day 1.

With black flag scores and the forecast for lighter breezes, sailors eagarly looked forward to a drop after the sixth race, which they fortunately got after day 2. Day 3 held to the forecast, and was very light with only one race being completed as the afternoon breeze died. The race committee worked hard on the final day and was a ble to get off two races before the 1pm deadline, making it a a nine race series with one drop.

Conditions on the last day were the most challenging, with some big position changes. The race committee did a great job getting the starts off, and then shortening the course at the leeward gate.

As had become a LISOT tradition, we had a large team dinner in The Grove which was attended by well over 100 LISOT opti, 420 and laser sailors (and our friends from the Bermuda team) - all who had a fun watching the Miami vs. Jets game and enjoying the mexican food at Senor Frogs.

Reinier was the top LISOT sailor finishing 9th - noteworthy as only four US sailors finished in the top 10!

Thanks to LISOT correspondents Roger Dorr and Merrill Ulmer who helped with this story.

Posted by Michael Rudnick at Wednesday, December 31, 2008 No comments:

Congratulations to all who will be representing the United States at the 24th International Easter Regatta at the Braassemermeer YC in Holland over Easter weekend.
The US Team will be chock full of LISOT sailors this year - 7 of the 20-person team are LISOTers, including:
And LISOT's Amanda Clark will be one of the two USODA coaches!
Posted by Michael Rudnick at Monday, December 15, 2008 No comments: 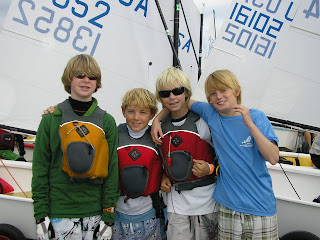 Race 1 and moved up from 33rd after Day 1 to finish 13th overall and was LISOT’s top sailor.

Congratulations to Reinier, Lily, Megan, Katie and Adele who qualified for spring travel teams. Depending on acceptances, Roger, Andrew and Sammi could also make a team.

Congrats are also in order to former LISOTer Brendan Shanahan (who moved to Atlanta this summer), with a 22nd place finish and Holly Tullo who was 20th overall and the 2nd girl (and will likely be going to the South Americans in Ecuador). 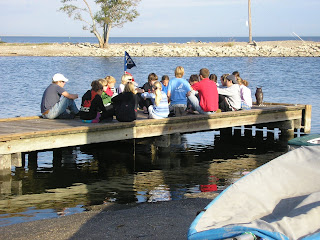 On the second and final day of racing everyone was greeted with warm temperatures, partly sunny skies and fresh, hot beignets and coffee from the ledgendary Café DuMond. Unfortunately, the Rce Committee was also greeted with a rapidly moving storm front bearing down from the west with lots of yellow and red on the radar.

The RC hoisted the AP ashore at 0830, waiting for the front passed. Luckily that happened as forecast around 1045. Although the front arrived with a good blast of wind, it also was the start of what would be a full day of rain. And, as storms usually do, as it blew off to the east it– you guessed it – took all the wind with it. Sailors were left with very light and shifty conditions.

Trevor and Brian did a great job getting our sailors focused on what was shaping up to be a very challenging day, both physically and mentally.

With almost all of the 141 sailors desperately wanting a fifth race for a throw out, the first race of the day (Race 5) began with a general recall and then a black flag start in extremely light westerly 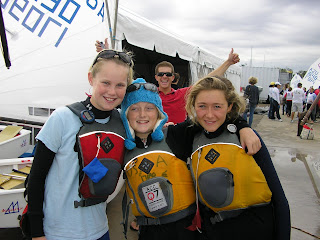 zephyrs. It took nearly 5 minutes for the entire fleet to cross the starting line of the Olympic course, against a slight current running down the course (shades of this 2008 JSA Champs). Wisely the RC abandoned the race with lead boats only about half-way up the first weather leg.

Race 5 restarted after an hour-plus waiting for the wind to fill back in from the west at about 4 knots. With a very short weather leg of maybe .2 mile, the fleet cleared the line and moved well up the leg. As the lead boats rounded the weather mark and bore off to the reach mark, the wind backed to the left causing the reach leg to become a slight upwind beat to the ‘reach’ mark.

The top 8-10 boats immediately tacked onto port to get up to the new layline. The next 10 boats held their starboard beat. The wind went right about 10 degrees, the leaders tacked back onto starbord and rounded the reach mark. The next 10 made it with only a very short hitch ‘up’ to the mark, thereby closing in on the front pack. Boats from about 20-on back never tacked, and the fleet was well on its way to the leeward mark when the RC blew off 3 guns with about 2-3 knots of wind. Unfortunately, LISOT has a large group of sailors in the top 25.

The sailors all drifted back down to the starting area in hopes of getting in the much needed 5th race. But daylight was starting to slip by as it was now approaching 2pm with plenty of rain, but not much wind in sight. Every time the rain would let up, the breeze would go to the south. Then the rain would roll back in and the breeze shift to the west.

The RC was determined to get this all-important 5th race completed, so they set up a very short Olympic course. The race finally started in 3-4 knots of lite westerly breeze and rain. As the wind shifted, the RC flew the C flag, blew lots of whistles and got marks moving. The course was so short that the lead boats reached the first leeward mark before the full fleet had even rounded the first weather mark.

As is the case in conditions like this where clear air is so important, the lead boats often pull away, and they did. Adele got a good start, played a good shift on the first beat, and rounded the first mark in the top 10. Reinier nailed the start at the boat end and was right behind in about 10th. As the lead boats stretched it out, Adele finished 7th and Reinier 10th!

Unfortunately, most of our LISOT sailoers were not nearly as fortunate, with many finishing well in the middle of the fleet. Race 5 finished around 4pm. As the sailors headed in, as always seems to be the case, the wind finally settled in from the south at a nice 7-8 knots. And similar to this year’s nationals, boats were de-rigged, and coach boats hauled in the rain. At least it was light rain and not the downpour seen at Patchogue.

After a few protests were heard, the awards ceremony was held around 1900 hours.

As day broke on Sunday morning and many rushed off to catch early morning flights back to the snowy north – the skies were clear over New Orleans, the wind was howling out of the west at 20+ with the big steep chop that Lake Pontchartrain is known for.

Next stop for LISOT – the warm windy waters of Biscayne Bay for Orange Bowl.

Posted by Michael Rudnick at Monday, December 01, 2008 No comments: