October 26, 2008 - Berlin, Germany - The forecast was for rain but instead the 16 teams awoke to an early sunrise due to the end of daylight savings time and clear skies. There was still one flight to complete for Round 1 on Course B but the entire fleet left shore just before 0900. The wind was what team racers would hope for - 8 to 12, and the temperatures were rising with the sun. 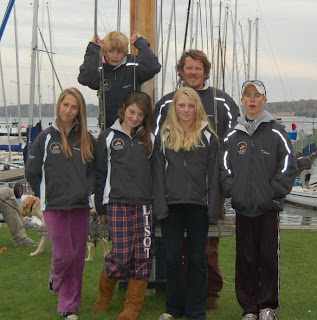 LISOT's first opponent was UKR. On Saturday the LISOT vs UKR match had been abandoned when the wind died.

The day started off as Saturday had ended with a win. This put LISOT at 4-3.

Now LISOT had to switch courses for the four races of Round 2. Although they beat their first opponent FIN, LISOT was not as fortunate against the host team from the Potsdamer YC, GBR, and eventual runner-up, ITA. At the end of Round 2 LISOT's record stood at 5-6 but a number of tough teams still were ahead.

Round 3 opponents were POL, TUR, NEL & DEN. Unfortunately these teams represented four of the top seven in the regatta. The going was going to be tough. The wind was still gorgeous although it was now mostly cloudy.

For the POL, NEL, and DEN races LISOT struggled with their opponents' consistent speed, sharp team racing tactics and better experience in lake conditions. Against TUR LISOT had maybe their best race of the series only to lose just a few lengths from the finish. The last 5 boats in the race finished about 6 lengths apart. That was it. A 5-10 record. Some races that were within reach that didn't work out and some races where the other team was clearly better. Overall, a great experience that up and coming sailors should hope to have.

After Round 3 all the teams went shore and then the top four teams were announced to sail a finals and petit finals (1 vs 2 and 3 vs 4 ). All four teams had identical records of 12-3. It was RUS vs ITA in the final and NOR vs DEN in the petit final. The overall winner was RUS followed by ITA and then DEN and NOR.

LISOT's team of Tracy Doherty, Reinier Eenkema van Dijk, Megan Grapengeter-Rudnick, Elliott Morrill and Laura Wefer won and lost together as a team. All of them showed moments of brilliance but more significant was the experience of international team competition. They all showed good sportsmanship. As always, the regatta was very well run and the friendships long lasting (See pictures from Janet, Annette and Karen). It is the finest in international Optimist team racing competition.

Thanks to Coach Soren Laugesen and Team Leader Annette Morrill for all their hard work and passion.

The weather was kind of dreary and there was very little wind but that didn't dampen the spirits of LISOT sailors Tracy Doherty, Reinier Eenkema van Dijk, Megan Grapengeter-Rudnick, Elliott Morrill, and Laura Wefer representing the USA in the 21st Euro Opti Team Cup at the Potsdamer YC in Berlin, Germany.

Although LISOT did not fair well against their first three opponents GER, RUS, and NOR they did prevail against SWE, a local GER team, UKR and POL 2 to end the first round at 4-3.

At the end of the first 7 races LISOT switched courses in order to sail against FIN, Potsdamer YC, GBR and ITA. After these four races LISOT will again switch courses to finish against POL, TUR, NEL, and DEN.

After the teams sail one race against each the top four teams will sail off in a semi-finals and finals.

Sunday has brought perfect fall sailing with modest temps and nice wind. It should be a good day.

The Club website is www.pyc.de
Posted by dwefer at Sunday, October 26, 2008 No comments:

It was another gorgeous day in Berlin today.

Coach Soren Laugesen arrived by van late last night and met the sailors for the usual extensive Hotel-Petit breakfast. Immediately following breakfast it was a short walk to the club, get rigged up and out on Lake Wannsee.

The breeze was light to medium and the sailors had a nice practice including some races against the team from the Netherlands.

There are 16 teams. Everyone will race against everyone else once to determine the top 4 teams.

LISOT's first race is against GER. Second is NOR and third is POL 2. After these, the order is RUS, SWE, SCG (a regional GER team) and then UKR (Ukraine).

The Opening Ceremony is at 0830 on Saturday and my reports should start about 1015.

The weather forecast is pretty good for tomorrow but Sunday doesn't sound too good.


Posted by Michael Rudnick at Friday, October 24, 2008 No comments:

Team LISOT arrived in Berlin without incident today. All the luggage arrived and the sun even greeted us!

It was a gorgeous day in Berlin. Team Leader Annette Morrill coordinated a great tour of Berlin that the adults enjoyed. The sailors learned some - when they were a awake.

We have just completed a nice dinner at Hotel-Petit and are now solving the problems of the world with a coaches meeting.

Soren arrives late tonight. Tomorrow the sailors will practice and Saturday and Sunday is the regatta.

The weather forecast isn't quite as nice for the weekend but we'll report the details on the weekend.

Brant Beach YC on Long Beach Island, NJ hosted the 2008 USODA ACC's over Columbus Day weekend. 45 sailors on team LISOT were apart of the 260 that were greeted with fantastic weather, very strong competition (stronger, some said, then at Nationals), utterly fantastic race management, and a simply wonderful host club.

Ian Stokes from Norfolk YC won the regatta in a tie breaker with Tito Aponte Taboas from Palmas, Puerto Rico. Both had a mere 15 points, and 4 bullets apiece. Norwalk's Max Simmons, who was leading after Day 1, dropped back to 3rd with 19 points (and also 4 bullets)! 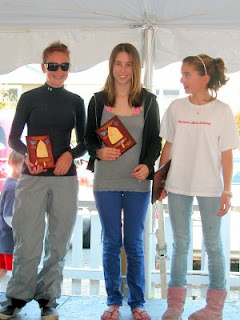 Lily Katz (center) was the top finisher from LISOT at 13th (and 2nd girl overall).

The regatta used the same flight set up as nationals which enabled the race committee to run 6 races on Saturday under sunny skies, air temps in the low 70s and terrific wind in the 12-18 knot range.

PRO Bub Covacs was heard to say "we chose to run the regatta on this date over a year in advance because we knew the near full-moon tide would push a strong current down the course, eliminating the need for general recalls." But Bub, 'how did you know which way the wind was going to blow?' OK, maybe the quote was taken out of context or was heard after a few of the kegs were tapped for the parents. Nevertheless, there were no general recalls!

Sunday saw considerably lighter conditions of 4-8 and a shorter course. The RC ran 4 races and had the kids back to the beach by 3:30pm in time for a BBQ, raffle and awards ceremony.

Megan and Connor each had a bullet, and Lily, Roger, Ty and Reinier each had at least one 2nd place finish.

The team was coached by the usual terrific team of head coach Trevor Moore and his team of Jeff, Karl and Pete who covered the broad scope of skills and ages on the team with their laser-like focus on the kids.

BBYC ran a wonderful regatta - not only serving up great wind and weather, but a club facility that made everything smooth and easy - from parking, to opti and coach boat launching, to nearby hotels and restaurants. There was morning breakfast for kids and parents alike, as well as a great post regatta BBQ that topped off a perfect event.

By 6pm everyone was on the road home - which could also be a record for speed of protest hearings, getting scores posted (they were often up on the web even before being posted at the club!), and handing out the trophies. BBYC was in the groove the whole weekend, never missing a shift!

Congrats to Event Co-Chairs John Barbano and Scot Ellis, PRO Bub Covacs and the huge BBYC volunteer team who made it all look seamlessly easy.

And thanks to BBYC for inviting LISOT down the prior weekend to join the Sunday Opti sailing.
Posted by Michael Rudnick at Monday, October 13, 2008 No comments: